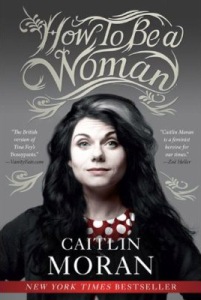 How to Be a Woman by Caitlin Moran

Review: I saw this book touted as the UK’s version of “Bossypants” but Tina Fey was better. This book is just on the verge of becoming a diatribe which didn’t appeal to me. But it did have some good quotes.