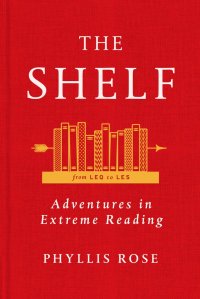 The Shelf: From LEQ to LES: Adventures in Extreme Reading by Phyllis Rose

Review: I picked up this book because it had such an interesting premise. Ms. Rose set out on a mission to read all the books on a random shelf at the library. However, once I started to read her account of this mission, I discovered that she did not read all the books and it wasn’t actually a random shelf since she imposed somewhat arbitrary rules on herself (i.e. cannot pick a shelf with more than four books by the same author and the shelf had to contain a variety of books from past and modern times along with both male and female authors).

However, it was Ms. Rose’s own writing that bothered me the most. Her reviews of the various books from the shelf have an arrogance about them. She only has a few fleeting positive things to say about the books she has read which makes her book about them feel like a gigantic condescending rant. For example, in her review of “The Phantom of the Opera” by Gaston Leroux (just for perspective, this book rates 3.96 out of 5 on Goodreads after over 100,000 reviews), Ms. Rose she says, “A bad book can tell a great story, however inefficiently. Posterity can do an auteur’s work of polishing a narrative, and it did so in the case of Phantom, getting rid of useless plot complexity and slimming down the story to its archetypal core.” Basically, she’s saying that the movie (or stage production) is better than the book. And maybe it is, but this was an excerpt from a book she claimed to like and yet, she spends about six long paragraphs discussing all the books flaws before two very short paragraphs telling her reader that she found the book “riveting.” Why did she like it? I don’t know. What did she find “riveting?” I think because it was a “female Faust story.” I would have liked to hear more about that than how clumsy she found the narrative or the insipidness of the characters.

I haven’t read any of the books she reviews but I have a hard time believing that she is as good a writer as to justify her superior tone. Also, in order to set out on a mission of this nature, I feel that a person should have a love of the written word that never came through in Ms. Rose’s book. I found myself as disappointed with her book as she seemed to be with the ones she read.