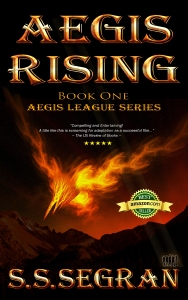 “From the flames of Cerraco five will arise, Saplings of Aegis, the bearers of light…” so begins the ancient prophecy of a hidden civilization thriving in a small valley in northern Canada. They have been awaiting the five “chosen” ones for hundreds of years. Little did they know the five “Saplings of Aegis” would be five teenage friends who literally fall from the sky in a fireball. Tegan, Kody, Jag, Mariah and Aari survive a plane crash that drops them into their destiny. They must become the five bearers of light against a rising darkness that immediately threatens the hidden valley and poses a danger to the rest of the world. Ms. Segran’s sci-fi adventure is remarkably imaginative. While the action starts off slowly, it becomes increasingly captivating. The five protagonists are likeable and watching them become heroes is satisfying. Ms. Segran’s writing is polished and her imagery vivid. All in all “Aegis Rising” is a refreshing story with broad audience appeal.