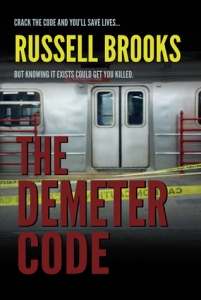 The Demeter Code by Russell Brooks

To say there is a lot going on in “The Demeter Code”  would be an understatement. Each of the first five chapters deal with a different character in a different part of the world. This novel is not a casual read; it requires attention. “The Demeter Code” is an international spy thriller where CIA agents Ridley Fox and Nita Parris chase down a corporate conspiracy and endeavor to stop a terrorist attack against the United States. While the premise was definitely interesting, I felt that it took too long to get to the heart of the story. I understand the need to build to a climactic point but I didn’t quite get into the action until about 70% of the way through. Also, Mr. Brooks’ writing had a level of vulgarity that made me slightly uncomfortable at times. That being said, I enjoyed the fast-paced conclusion to the story.