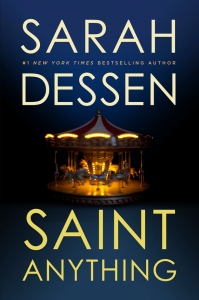 Saint Anything by Sarah Dessen

Having read a few Sarah Dessen’s novels, I can say that she does have a formula. Girl has a problematic past, nice guy comes and draws the girl out of her shell, girl falls for boy. Saint Anything is no different. However, that doesn’t make it a poor reading experience. Sydney has always lived in her older brother’s shadow, even more so now that a drunk driving conviction landed him in prison. With her parents completely focused on her brother, Sydney’s life is adrift until she meets the Chathams, Layla, Mac and their parents, at their family pizzeria. Sydney makes for a fairly good heroine. She has her flaws and fears, but she is getting by as best she can. It’s actually Sydney’s parents who are the hardest to read. Neither trusts Sydney after what happened with her brother. It is infuriating at times and led to some very predictable drama. Overall, I think the best way to describe this novel is adequate.