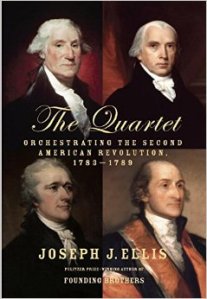 Pulitzer Prize-winning historian Joseph J. Ellis’ new book looks at what he terms “the second American Revolution,” bringing thirteen disparate states into one United States through the drafting and ratification of the Constitution. Ellis postulates that it was four men, George Washington, Alexander Hamilton, John Jay and James Madison, who were instrumental in bringing about the Constitutional Convention and subsequent ratification of American nationhood. Ellis paints a profound picture of the obstacles that “the quartet” faced in turning states very much focused on their own issues and just finished fighting a strong central government structure into accepting a national republic. Just as in his previous book, Revolutionary Summer, which detailed the incredible circumstances surrounding the beginning of the war for independence, Ellis uses straightforward prose to discuss a dramatic, complicated and precarious time in American history. By all accounts, the fact that the United States just celebrated its 240th birthday is astonishing and truly impressive.