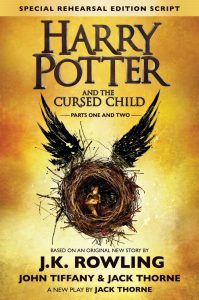 Let me preface this review by saying that I had heard that die-hard Harry Potter fans, like myself, were finding Cursed Child to be wanting. I almost decided not to read the play, figuring I would only be disappointed. However, I am glad that I went ahead and read it. While not being completely on par with the rest of the Harry Potter novels, Cursed Child was not nearly as bad as I feared. Being a play instead of a novel has both upsides and downsides. The pace moves along at a fairly quick clip with only a few lulls in the action but because of this, there is very little character development beyond surface motivations. Yet, I was comforted to see that the magical world that I love was still recognizable and the story felt like it fit within the mythos. So, if you have more than lukewarm feelings toward the Harry Potter series, I would still recommend this play but I would also caution you to temper your expectations down a few notches because this is not another Harry Potter novel.

2 thoughts on “Book Review – Harry Potter and the Cursed Child”