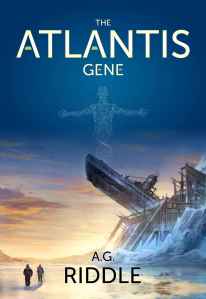 The Atlantis Gene by A.G. Riddle

“The Atlantis Gene” is a sci-fi, historical thriller. It contains everything from technologically advanced beings to secret societies vying for the fate of the human race. The book begins with Dr. Kate Warner doing autism research in Jakarta, Indonesia. She quickly becomes involved in a dangerous conspiracy when two of her child subjects are kidnapped. From there the story jumps around the world following a host of different plotlines which do not merge until much later. While I understood the interconnectedness of the narratives, I was much more invested in the characters of Kate Warner and her protector, David Vale, than I was in any of the other action. However, overall, I liked the action-packed, tension-filled writing. I also liked that the science fiction was far-fetched but still believable and had some very interesting historical links. “The Atlantis Gene” is the first of three novels and I can say I am intrigued enough to finish the trilogy.