Maybe I should start going by my initials?

I was reading my friend, Dori’s book reviews on Goodreads and was completely enthralled. So I asked her if I could share her wisdom with all of you and thankfully she agreed. Please welcome Dori Myer to Novel Escapism!

This Side of Paradise by F. Scott Fitzgerald 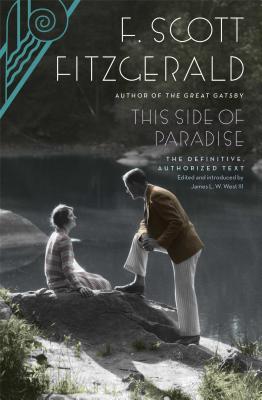 Review: Considering Fitzgerald wrote this book when he was 22, it’s quite impressive. I could see the budding Gatsby themes in this novel and appreciated seeing an author in his infancy. It’s usually interesting to me to read early and late novels by the same author (Vonnegut is a great example of massive changes over his career). For Fitzgerald, his collection doesn’t include many books, but there was plenty of growth within just a few years.

This Side of Paradise is like proto-Gatsby. Fitzgerald explores themes of excess, entitlement, upper crust, friendship, religion, lust, and all the other good things in America. It follows the life of Amory Blaine, a rich kid from Minnesota who is a big fish in his midwestern town, but learns that he’s only one of many bright and lucky young guys once he attends Princeton. He begins as sort of a turdy kid, who is unkind to his peers and feels super special because his disengaged mother tells him he’s amazing and treats him like a little adult. When he attends boarding school and then college on the east coast, we get a great juxtaposition of how landed society in the east coast interacts with wealth from the west. Fitzgerald doesn’t tell us much that we probably don’t already know about the snootiness of the east when turning down their noses at anyone from west of Pennsylvania. What I found most interesting about the book was how little has apparently changed in American society. He goes on diatribes about how rich capitalists are ruining the country and how damaging elitism is to the fabric of society. Considering he published this book in 1920, it’s fairly disturbing how endless and universal these concepts are.

I wouldn’t say we grow to love the protagonist as we see him grow into a more aware and empathetic character, but I don’t think we are meant to. He certain becomes more analytical and generous, though this leads to him becoming a starving and lazy artist. His notions of community and a classless society end up ruining his “potential” and all the efforts to groom him into American greatness (aka being rich). Women leave him because he doesn’t make money and can’t support them, families reject him once they realize he’s more clever than he is successful, and friends abandon him when they notice his good looks and wit aren’t enough to provide a good network for them. Here, “potential” equals attractiveness + money + important friends (or, “gonnections” for those of you Gatsby enthusiasts). Sometimes intelligence helps, but more importantly is a willingness to betray and flatter in equal measure. Nobody said Fitzgerald was a happy go lucky guy.

For those of you looking for more versions of Gatsby, this isn’t quite there. Gatsby is a much cleaner book thematically and in its pacing. There are endless references to authors of the time in This Side of Paradise, which can make some of his Princeton days difficult to follow and sort of boring if you aren’t into Wikipedia-ing early 1900s poetry and novels. According to the preface, contemporaries reading the book would have had a much easier time understanding these bits and their relevance. However, knowing that Fitzgerald was 22 when he wrote This Side of Paradise, and that much of it was based on his life, there is great depth and maturity to the novel and it’s mostly a pleasure to read. Try it!

Find more of her musings at: http://findingdori.wordpress.com/mr-blog/