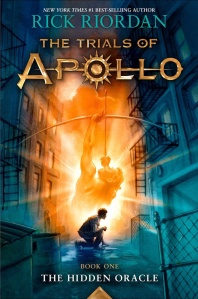 The Trials of Apollo, Book One: The Hidden Oracle by Rick Riordan

The Trials of Apollo picks up six months after the conclusion of the war against Gaea and her giants in Rick Riordan’s previous series, The Heroes of Olympus. Zeus, angry over the part that one of Apollo’s demigod sons played in the recent war, punishes Apollo by turning him into a dorky, mortal teenage boy. Apollo wakes up in an alley in New York City with fuzzy memories from his previous four thousand years and only a fraction of his usual godly powers. Tethered to the servitude of a surly daughter of Demeter named Meg, Apollo must find a way back into Zeus’ favor and Olympus. Rick Riordan is one of my favorite authors because his writing captivates my attention from start to finish. I mean, each chapter in The Hidden Oracle starts with a haiku (Apollo being the god of poetry), how can you NOT like that? I also love, love Rick Riordan’s sense of humor and the way he weaves ancient Greek mythology through the modern world. While I don’t believe it is strictly necessary to start at the beginning of Riordan’s Greek mythology series (going all the way back to The Lightning Thief) in order to enjoy this new one, some minor things will be lost if you don’t and I think all the rich history of this world is worth the extra effort.

The Blood of Olympus by Rick Riordan

It’s over. After nine years and ten witty and entertaining books, Rick Riordan’s Greek mythology novel series is complete. Writing this review feels a little bittersweet as I’m sad that there will be no more exciting Greek/Roman demigod adventures to read but, on the other hand, completely satisfied by the last installment. Yes, I’m an unadulterated Rick Riordan fangirl but “The Blood of Olympus” was truly a great ending to The Heroes of Olympus series. It had it all: page-turning suspense, the usual levity and fun, emotional drama and a rewarding resolution. I don’t want to give anything away for those that haven’t been able to devour their copies yet so I’ll just say that if you haven’t tried these books, I highly recommend them all as some of the best I’ve read.

The House of Hades by Rick Riordan

Review: Just another in a string of great books from Rick Riordan. He’s right up there with Jane Austen and J.K. Rowling amongst my favorite authors. “The House of Hades” is the fourth book of The Heroes of Olympus series. This series has a lot more characters than Riordan’s previous books and he writes his characters so well that I’m already scared that one or more of them might end up dying. His characters feel real and I’m attached to all of them. As usual, great combination of mythology, wit and downright great storytelling. Can’t wait until the conclusion comes out next fall! 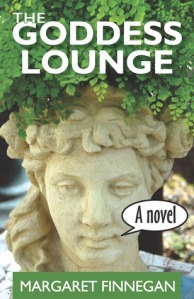 The Goddess Lounge by Margaret Finnegan

Review: While being slightly contrived, this modern retelling of The Odyssey was also interesting. I am a fan of Greek & Roman mythology and I liked that the main character was a heroine trying to find her way. Overall, not a bad way to spend a couple hours.

The Mark of Athena by Rick Riordan

Review: Full disclosure-I started this one a bit early. I make no apologies. I love Rick Riordan. This, the third book in The Heroes of Olympus series and the eleventh Riordan book I’ve read, just reinforces my thought that these books were written especially for me. They are the perfect blend of wit, adventure, imagination, silliness and mythology. I am drawn to every aspect of Riordan’s writing from his compelling characters to interesting plot twists to attention to detail. Love it! The only thing that’s going to tide me over until the next installment (fall 2013) is the fact that Riordan’s stories have great re-readability.