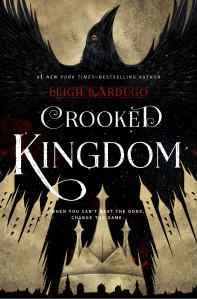 Crooked Kingdom is the sequel to last year’s novel, Six of Crows. Again, Leigh Bardugo comes through with an engaging, character-driven action story. The story picks up right after the events of Six of Crows with Kaz Brekker and his gang having narrowly escaped their first mission. Now, double-crossed and still dealing with the effects of nearly dying, Kaz must use his mastermind skills to get his friends out of the city. Told in alternating point of view chapters from each of the six characters, Crooked Kingdom takes readers on the same roller coaster ride as its predecessor. And that’s not a bad thing. Having been absolutely taken in by the characters after Six of Crows, I found this novel to be even richer and more captivating. But, beware. Leigh Bardugo is a master of the end-of-chapter cliffhanger! This book is incredibly hard to put down after you get into the heart of the action.

Six of Crows by Leigh Bardugo

Kaz Brekker, criminal mastermind and leader of one of Ketterdam’s many gangs, has just been offered the score of a lifetime. The catch? He must pull off an impossible heist. But, he has a plan and maybe the right crew of thieves and thugs can pull it off. Six very different outcasts must come together as a team if they are going to infiltrate one of the most impenetrable fortresses ever built. Six of Crows took a good eighty pages to capture my attention, probably because I was previously unfamiliar with the rich world in which Leigh Bardugo sets her novels, but once the action picked up, I was hooked. I love the drama of a good heist story and this one spared none. I came to thoroughly care about her characters and appreciate the uniqueness of each through alternating perspective chapters. The story reminds me of The Lies of Locke Lamora by Scott Lynch. Both contain rich fantasy worlds, flawed characters that you end up rooting for and a wonderful snarkiness. On the whole, I would enthusiastically recommend Six of Crows.