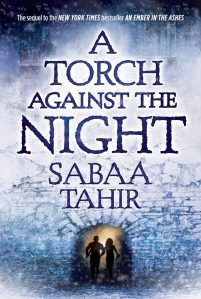 A Torch Against the Night by Sabaa Tahir

The sequel to her bestselling debut, An Ember in the Ashes, A Torch Against the Night continues the story of the former slave Laia and the former elite soldier of the Empire, Elias, as they flee the wrath of the new Emperor. Laia and Elias head north to the infamous Kauf prison where Laia’s brother has been taken. Amidst a rebellion, ramblings of civil war and being hunted by Elias’ former best friend Helene, Laia and Elias must break into and out of the Empire’s most secure prison. While it was the world-building that drew me into the previous story, in this entry it was the characters, particularly Elias. Ms. Tahir has crafted a truly complex, flawed and yet absolutely sympathetic character. I found myself caring deeply for what happened to Elias and interested in his relationship with Laia. It is going to be a long wait to books three and four!

An Ember in the Ashes by Sabaa Tahir

Set in a fantasy world based on ancient Roman culture, An Ember in the Ashes follows the story of two young people caught up in a violent, oppressive world. The novel is narrated through the alternating viewpoints of Elias, trained from a young age to be an elite soldier for the Empire at the exclusive Blackcliff Academy, and Laia, coerced into spying on Blackcliff for the Resistance by becoming a slave. Their stories become intertwined as both get caught up in a much larger political quagmire. Ms. Tahir has a gift for world-building. The world is both rich and dangerous. This well-written tale of conflict and hope was hard to put down. I hope there is a follow-up to this very promising debut from Sabaa Tahir.