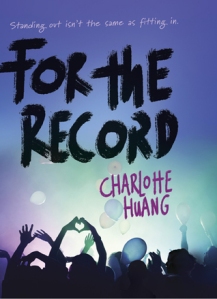 For the Record by Charlotte Huang

When Chelsea Ford steps in as the new lead singer of the band Melbourne, she has the summer tour to prove to her bandmates and the fans that she belongs, otherwise it’s back to her sleepy hometown in Michigan. Add to that the sudden attention from huge teen heartthrob, Lucas, and complicated feelings for Melbourne’s guitarist, Beckett, and Chelsea is in for an interesting summer. For the Record is a fun look at rock stardom and a young band. I liked how Chelsea’s character developed but some of the other characters felt one-sided. Also, the love triangle between Chelsea, Lucas, and Beckett felt a little forced. I can understand that Chelsea might get caught up in the fame of someone like Lucas but I found him incredibly annoying. I even skimmed a little bit of the story in the middle when I couldn’t take any more of him and re-engaged once he was out of the picture. However, by the end, I felt myself wanting the story to continue so that I could see more of Chelsea’s musical journey.