About Last Summer by Patricia B. Tighe

When Gabby Vega’s best friend, Kenzie, accuses her of failing to follow through on anything and challenges her to work on her acting by pretending to be from Spain for one week, Gabby decides to prove she’s not a quitter. After all, it’s only one week of vacation with Kenzie’s cousins. But, that was before she knew that Noah Jernigan would be joining. Noah, the boy from drama camp last summer who she had to dump when summer was over. Now he’s the only other person who knows who she really is and seems to be taking revenge for his broken heart by seeing how uncomfortable he can make Gabby’s week-long challenge. Overall, Patricia B. Tighe’s latest novel has all the hallmarks of a good summer beach read, an easy, relaxing read with a happy, satisfying ending. My one complaint would be that both Gabby’s and Noah’s character felt a little flat. I was confused as to why Gabby was actually putting up with some of Noah’s sometimes cruel antics and why they were okay with the whole charade. However, the secondary characters were engaging and made up for the flaws in Gabby and Noah and the story kept me interested until the end.

Imogen Shaw is leaving Florida for college in Boston in 34 hours and she’s more than ready. But, she’s not ready for Seth Cavanaugh. When Seth and Imogen are thrown together for a one-night scavenger hunt, both of them will find what they are missing and will have to take a chance on each other. I liked this YA novel but it was not anything new or unique. The writing is very competent and the story, while predictable, kept my attention. I liked the scavenger hunt and the rapport between the main characters is believable and mostly natural. All in all, a fun, easy read.

Sloane’s summer is not going quite as planned. She’s been betrayed by her best friend, her boyfriend and all that she has left is a broken heart and a broken arm. Spending the summer in Hawaii might be the best medicine. Beaches, bonfires, and a cute boy named Finn help Sloane begin to heal. Summer of Sloane is a nice beach read that will make you want to plan a trip to Hawaii. Sloane is a great character. She is real and handles the drama and hurt in her life in believable ways. She’s flawed but grows over the course of the book and learns not only how to forgive but also how to live for herself rather than others. 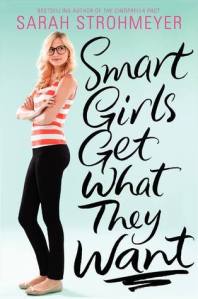 Smart Girls Get What They Want by Sarah Strohmeyer

Gigi, Bea, and Neerja have been best friends and at the top of their class for as long as anyone can remember. They just have to make it through high school and into their Ivy League colleges and their real lives will begin. But after they discover they might just be missing out on the full high school experience, they promise each other to take on a challenge to get them into the spotlight. Gigi, terrified of public speaking, runs for student rep. Bea, who used to be a great skier until her brother had an accident, joins the ski team. And, Neerja, finally tries out for the school play. They are determined to prove that smart girls can get whatever they want. I’ll admit that I picked up this book based on the title and the fact that it was on sale. It turned out to be a nice YA novel. I loved that the center of the story always stayed on the friendship between the girls. They were there for each other, encouraging and strong. The character development was another strength. It happened in a believable way that never felt rushed. Fun read for smart girls everywhere.

From the back of the book: “Is it okay to hate a dead kid? Even if I loved him once? Even if he was my best friend? Is it okay to hate him for being dead?” Vera Dietz’s best friend, Charlie, died and now he is haunting her. A thousand ghost Charlies show up in her car, in the bathroom and at the pizza place where she works. Vera is damaged and trying to get by without being noticed too much. Beneath good writing and captivating narrative, Ms. King’s novel is about growing up and how to forgive. Her writing is in the same vein as John Green. It feels authentic and her story deals with real issues. I liked the pacing and overall emotional weight of the story. I recommend this to most everyone as a good coming-of-age story and especially John Green fans.

The Distance Between Us by Kasie West

Review: Very nice little beach read! I read this book in one sitting and thoroughly enjoyed it. Ms. West created a contemporary, YA-romance/coming-of-age story that felt fresh. Yes, I knew that it was going to have a happy ending but it still felt original. I especially liked the heroine, Caymen Meyers. She was sarcastic and real. I think my only complaint—and it’s minor—would be that Caymen worked in and spent a lot of time in a porcelain doll shop. Every time I read about the dolls, I would picture some in my head and it was a little creepy. But who knows, maybe Ms. West meant for her readers to be thrown off-guard by the dolls.